In 2013, we decided to dress up as Disney villainesses, Cruella Deville and Maleficent. Impressed with our costumes, and with our makeup touched up by the theater department, we decided to pop into the classroom of the President of the Friends of the Library, interrupting his Biology midterm (but he forgave us – eventually), and the offices of the President and Vice Presidents of the College. Many people didn’t recognize us which allowed us to stay in character. We decided to stroll through campus, engaging students in spontaneous, in-character dialogues and some academic heckling. “Go pump some neurons. Expand your craniums or I’ll sic my dog on you and she’ll turn you into a toad.” Students ran across the quad to have their pictures taken with us. We should have charged a fee like they do in Hollywood!

The next year we were Laurel and Hardy. We got permission from some faculty friends to enter their classrooms and, armed with the Laurel and Hardy theme on a smart phone, we shoved our way into the rooms in classic L&H style. After playing 20 questions regarding who we were—“Are you Hitler?”—we said something short and simple like, "We’re from the library. Come and see us. We can help you with your research." 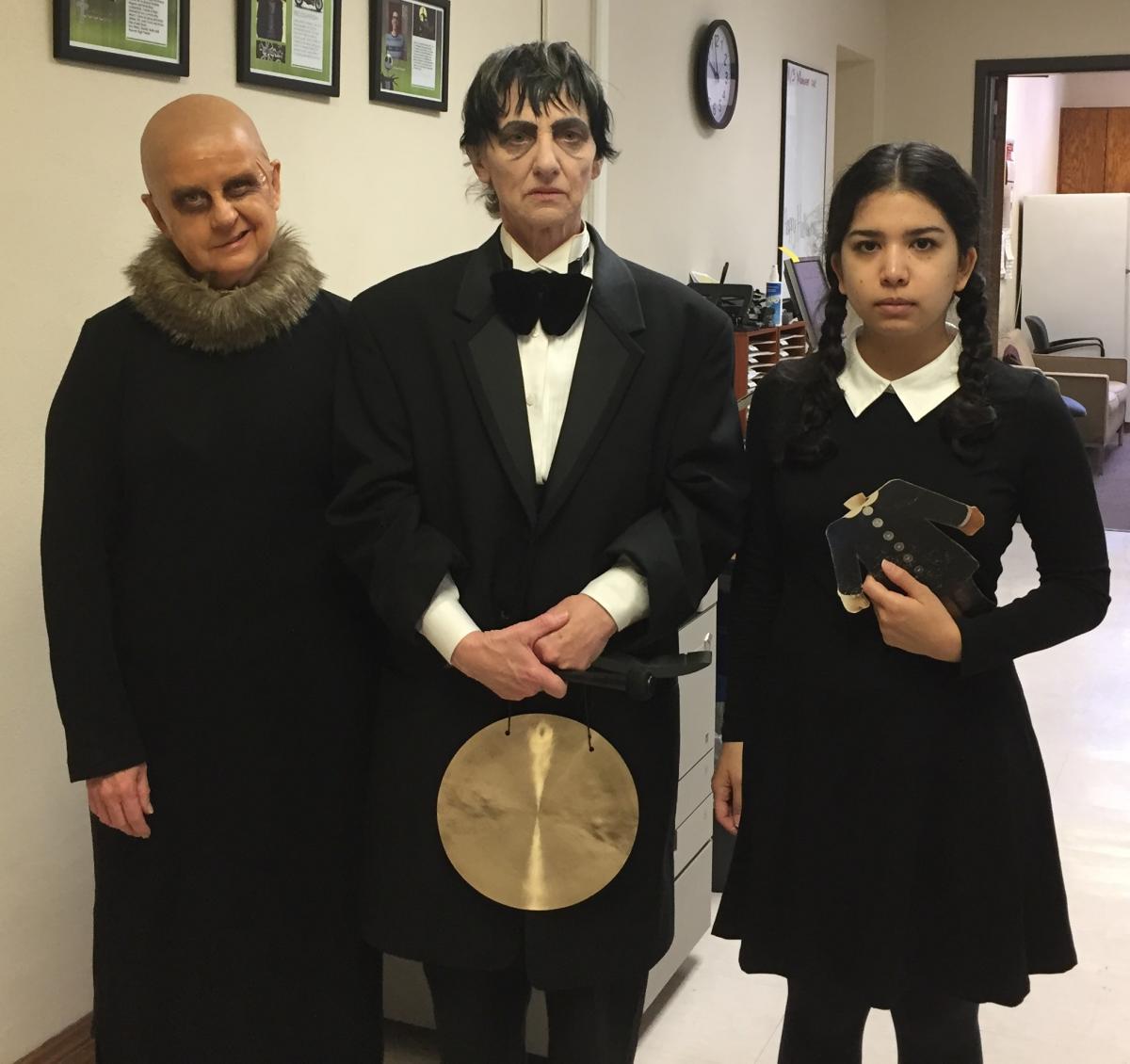 The bar was set high for 2015 and, after thinking of, debating, and discarding dozens of famous duos, we settled on Willie Wonka and an Oompa Loompa. (photo) We asked our Dean to bring in desk coverage so we could spend the morning visiting as many classrooms as we could. Laurel made a fantastic and highly authentic Willie Wonka costume (that was later used as a memorial tribute to Mr. Gene Wilder in August 2016). (photo) I purchased a generic Oompa Loompa costume and prepared to color my hair and skin. Feeling a tad inadequate, costume-wise and wanting our Halloween haunting to truly be an outreach event for the library, I concentrated on re-writing the Oompa Loopa song to focus on college research and libraries.
These were the lyrics:
"Oompa, Loompa, doom-pa-dee-do
I have a perfect puzzle for you
Oompa, Loompa, doom-pa-dee-dee
If you are wise, you'll listen to me
What do you get when you procrastinate?
Sub-par work and a paper that’s late
Anxiety, stress and hyper-tension
Only to hear “No Extension”
You should use the Library…
Oompa, Loompa, doom-pa-dee-da
With time management, you will go far
You will live in happiness too
Like the Oompa Loompa doom-pa-dee-do"
We went through the course schedule and planned our haunting, picking out instructors who we knew and who would (hopefully) enjoy our antics. Once in the classroom, we asked students to bring out their phones. (They were slow to react as it’s such a taboo, but then their teachers took out their phones as well!) We asked them to take pictures and videos and post us to social media. We wanted to “go virus.” (It always takes a while before the students get it and chuckle.) I proceeded to sing the song, watching the incredulous and mostly smiling faces on the students. I must have sung the song at least 20 times that morning. In one classroom, I recognized a young man with whom I had several negative interactions in the library. He was always talking loud in the quiet area, even though we have collaborative study areas where talking is allowed. He recognized me too, rolled his eyes, and smirked. I thought, Well, here goes any appearance of authority I might have had! But when I saw him again, in civilian clothes, he had become a fan of the library (and its rules).
Before the morning was over, we knew the theme for the next year (2016): the Addams Family. (photo) This would allow us to invite more people to join our retinue and, of course, there was a theme song to be re-written:
The Campus Library (to the tune of "The Addams Family")
"They’re sharp and they have knowledge
On how to get through college
Their sources will astonish
The Campus Library
Librarian’s smiling faces
Books, nooks and databases
Dynamic Interfaces
The Campus Library
(Neat)
(Sweet)
(Petite)
They all are research wizards
Don’t fret and twist your gizzards
They really will deliver
The campus Library!
So get a scholar’s cap on
Some paper you can scrawl on
We're gonna pay a call on
The Campus Library"
We upped the ante in 2017, adding yet another librarian. I reworked the famous scene from Shakespeare’s Macbeth and we visited 35 classes and administrative offices! (photo) We posted a video on our library Facebook page and the school’s PIO office posted it on the school’s Facebook page. We had, indeed, “gone virus.”
First Witch
"Thrice the Paper hath been explained."
Second Witch
"Thrice and once students complained."
Third Witch
"Teacher cries 'Tis time, 'tis time."
First Witch
"Round about the paper go;
In the poison'd website throw.
Add a Wiki and fake news,
Rumor, hoax and roommate’s views."
ALL
"Double, double toil and trouble;
Procrastinate and pressure double"
Second Witch
"Why do silly students suffer?
Know they not what libraries offer?
Great resources, databases
Ebooks, RAPs and legal cases"
ALL
"Double, double toil and trouble;
Procrastinate and pressure double."
Third Witch
"If they knew, would their ways amend?
And to the library quick attend?
Methinks the canny ones oft will
And find there waiting, Librarians, still."
ALL
"Double, double toil and trouble;
Procrastinate and pressure double."
Category:
Reference & Instruction