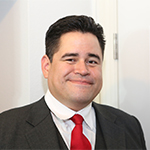 Valentin Macias, Reference and Student Programming Librarian. Valentin Macias was born and raised in Southern California. He received an MLIS from the University of Alabama, an M.A. in Education, a B.A. in Literature from UC Santa Cruz, and an A.A. and A.S. from Riverside City College. He worked as an adjunct librarian at Moreno Valley College, and directed the Westwood College – Inland Empire Campus library from 2015-2016. Prior to that, he experienced life as an academic instructor in various capacities in the Republic of Korea—having spent eight years teaching at Sungkyunkwan University in Seoul before repatriating back to the U.S. in early 2015. He likes to travel and photograph microfauna when there is time to spare.