Cause for Concern: Changes in the California Community College Statewide Database Package

The Electronic Access & Resources Committee of the Council of Chief Librarians (CCL-EAR) has been monitoring changes in the EBSCO package provided to all California community colleges. With a new contract having begun in January of this year, now seemed a good time to report: in the first 10 months of the new term, how has the package changed?

The picture is not encouraging. The number of titles that have either been removed or stopped (meaning new issues of periodicals are no longer added) is more than 2.5 times the number of titles that have been added. A closer look reveals that content leaving the package is more valuable than what has come in. A summary follows; for further details, please see a spreadsheet of source data. 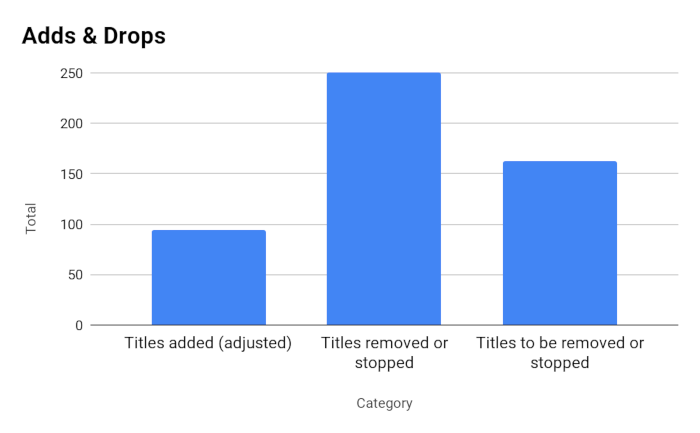 Of the added titles, just 58 are current periodicals, and four of those were “added” to a database, Military and Government Collection, despite already being included in Academic Search Complete. So, 54 periodicals total. Of these a few look interesting, such as a couple of behavioral science journals from Wiley, and an open-access oncology nursing publication, ONS Voice. All three of these come with a 12-month embargo.

Of the non-periodical content, some additions are of questionable value. These include ten health monographs from Demos Medical Publishing dating from 2009 and five PMPH monographs of the same or older vintage. In fact, both sets of monographs are not really adds; they were listed as drops the previous month. We also found a number of titles from Reaktion Books added to America: History and Life that are clearly out of scope, such as Drugs & the World, Warsaw, and Animal (“provides an overview of the ways in which we live with animals and assesses many of the paradoxes of our relationships with them”). Another off-base add to America was a Slavic History journal, Slovansky Prehled, which was subsequently removed from the database. Also added were oddly brief (15- to 18-month) runs of some popular Time Inc. magazines such as Martha Stewart Weddings.

EBSCO includes a variety of labels in reporting drops. Some titles are pulled completely; in other cases full text is removed while bibliographic records remain; in other cases full text is “stopped,” meaning that nothing is removed but new issues will not be added. For the purposes of this report we have lumped several categories together. Perhaps it is not fair to treat these together, since even if a title is not current, the content that remains can still be of high value. But our goal here is to monitor changes rather than the overall value of the package, and losing currency for a given title constitutes a distinct negative change.

In all, 250 titles fall into this combined “drop” category. Top publishers are Taylor & Francis, Hindawi, Sage, Demos Medical Publishing, Wiley-Blackwell, Routledge, PMPH, Pageant, Dove Medical, and Centaur Communications. Of these, the titles that were stopped slightly outnumber those removed.

In some cases EBSCO announces impending drops, although it is not clear when stoppage or removal will take place. Titles reported this year that as of the October 2018 spreadsheet had not yet been dropped--in some cases, reported as far back as February--total 164. Here we find more of the big for-profit publishers: 24 titles from Taylor & Francis, 17 from Wiley-Blackwell, 10 from Sage, and 4 from Routledge. Tribune Content Company lists 91 titles, including California papers from Barstow, Stockton and Victorville, but few if any of these appear to be current; so essentially, old news will be removed. 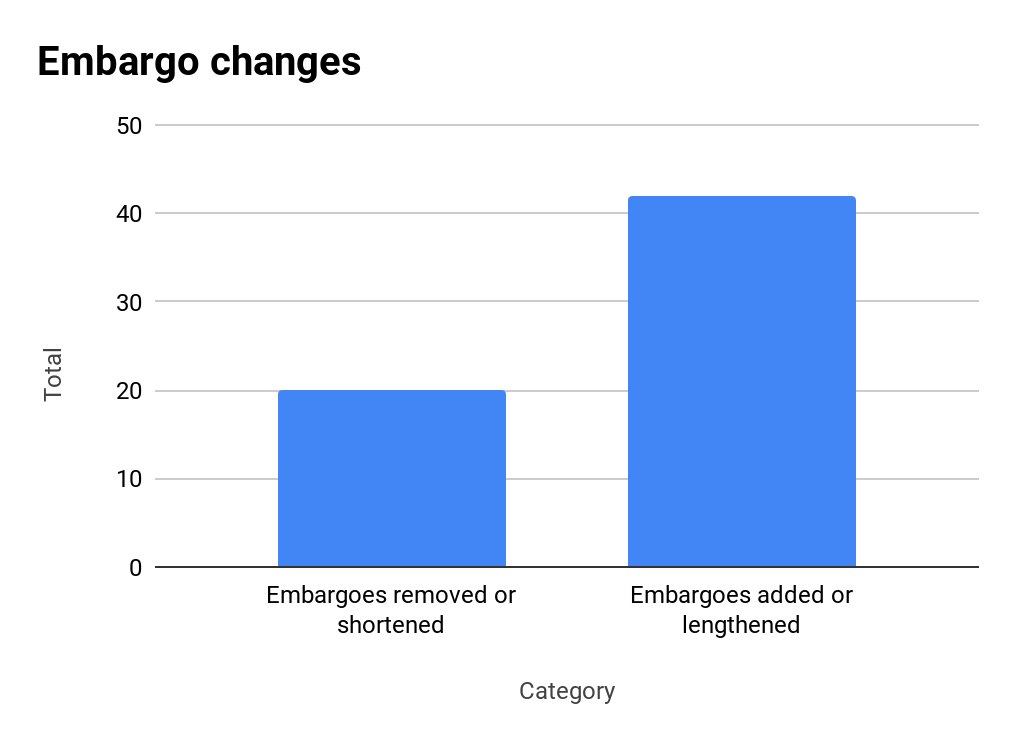 Journal embargoes are a real problem for community colleges, where we depend upon aggregators and generally don’t license “big deal” e-journal packages to fill in the gaps. So it is welcome to see embargoes removed from 19 publications from Cambridge UP, Crain (trade publications), Johns Hopkins, Oxford UP, Routledge, and Taylor & Francis. At first the list looked even longer, but it turns out that when EBSCO pulls full-text for an embargoed journal, they list it separately as having had its embargo removed.

It is great to see embargoes removed or shortened for 20 titles; and yet, for twice as many titles the situation has gotten worse, with the usual for-profit suspects showing at or near the top: Wiley-Blackwell, Taylor & Francis, Routledge and John Wiley & Sons. 12 months was the most common embargo length, but T&F prefers 18, and somehow the Journal of Youth Ministry needs to keep things under wraps for 2 full years. The good news is that while a couple pipeline-focused trade journals are listed at a JSTOR-worthy 28 months, a check revealed that the actual embargo is 28 days. If only this kind of reporting error were more common.

Titles were evaluated by three tiers of usage, drawing upon statistics from the Los Rios Community College District (for methodology, see the spreadsheet’s Notes tab). Singled out below are those that fell into the highest-use tier.

Of the drops, 7.6% fell into the highest-use category. Of those that have been removed, these include Journal of Psychology, Professional School Counseling, Scientific Journal of Humanistic Studies, Insights into a Changing World Journal, International Journal of Interdisciplinary Approaches, National Civic Review, and Aviation Week & Space Technology. 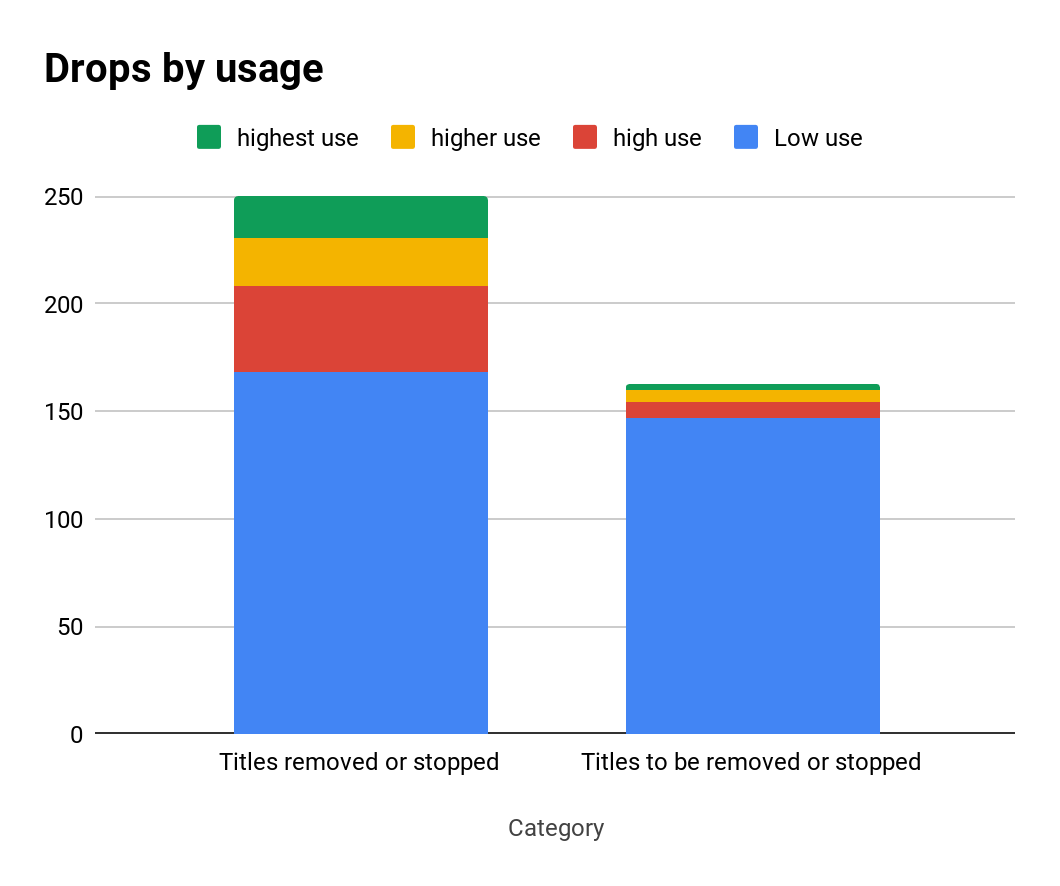 Highest-use titles still on the chopping block include Studies in English Literature, American Notes & Queries, and Shape. With nearly 100 minor newspapers included in the list, only 1.8% of the total were in the highest-use category.

25% of the titles that saw their embargoes shortened or removed were in the highest use-tier: Advertising Age, Crain’s Chicago Business, Crain’s Detroit Business, Modern Healthcare, and Pain Medicine. 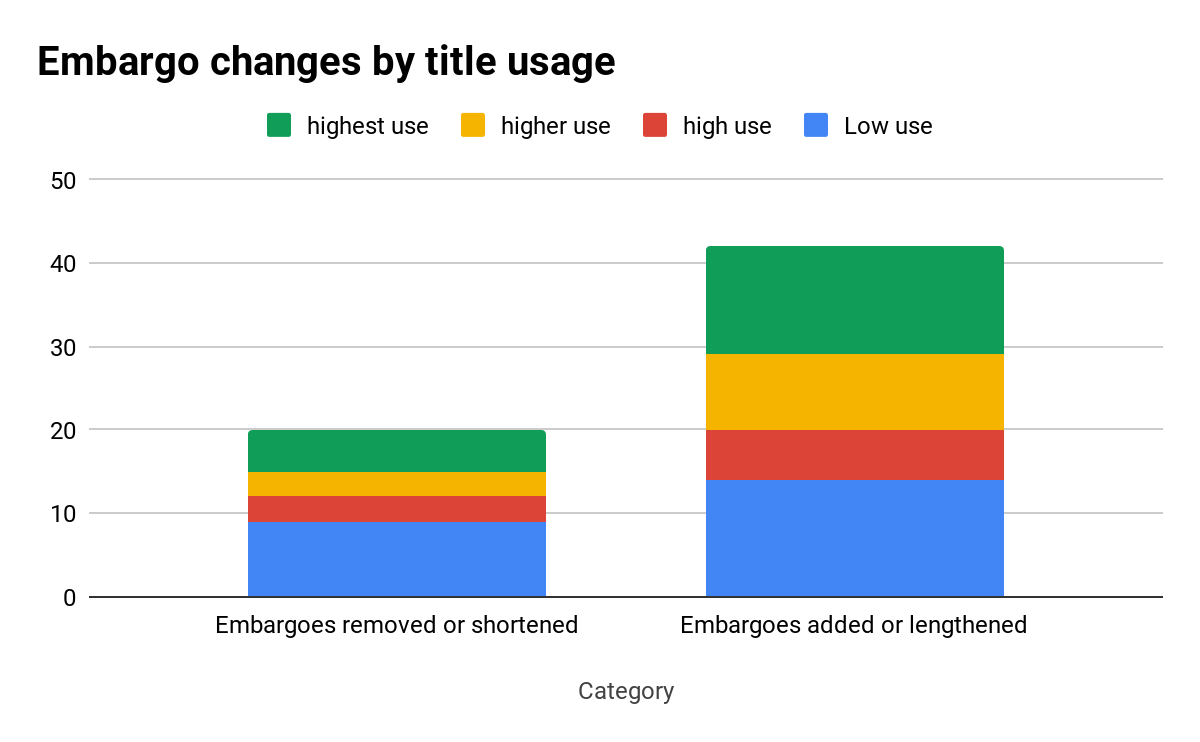 CCL-EAR has been concerned about the prospect of titles leaving Academic Search Complete and moving to Academic Search Ultimate, EBSCO’s larger, pricier collection, which would amount to inflation: to keep what you’ve got, you’d need to level up.

Thankfully, our concern is for now unwarranted: we have concluded that none of the titles dropped or stopped in the first 10 months of 2018 have been moved to Academic Search Ultimate.

We shouldn’t overstate things. Academic Search Complete alone contains over 8,500 full-text titles, of which something like 6,400 are actively received (embargoed or not), so it could be argued that a net loss of 30-150 titles, depending on how you measure “drops”, barely registers.

But setting aside the question of scale, it is clear that the last 10 months have not been good for the statewide package. Little of value has been added, and a number of high-use titles have been removed or stopped. It is welcome to see embargoes removed, but when embargoes are added for more than twice as many titles, many of them health-related, we have lost ground even there.

Of course it is possible that a slew of valuable content will soon be appearing in our EBSCO databases; aggregator licensing is a dynamic and far from transparent business. It’s also clear that, where the big for-profit publishers are concerned, churn is the rule; content comes and goes. It is unfortunate, though, when so much more goes than comes, and when the titles cut include valuable titles such as Journal of Psychology.

EBSCO may not always be in the driver’s seat here. A check of knowledge bases suggested that Taylor & Francis, which hawks its own journal packages, has chosen to no longer offer Journal of Psychology via aggregators. Nevertheless, when EBSCO negotiates with publishers, it should focus on retaining high-use, current titles, even if the total number of titles included in the database drops as a result. Hopefully the next time a summary like this one is created, it will report better news.